How and Why to do First Wort Hopping

If you’re looking for a way to round out your toolkit of homebrewing techniques, you may have come across first wort hopping or FWH. This throwback method is supposed to save you both time and mess during your boil, plus preserve those volatile hop oils for flavoring.

Theoretically, at least. While we can’t guarantee any flavor change to your beer if you hop your first wort, we can say your brew is less likely to boil over using FWH rather than other addition methods. That alone makes this technique worthwhile. 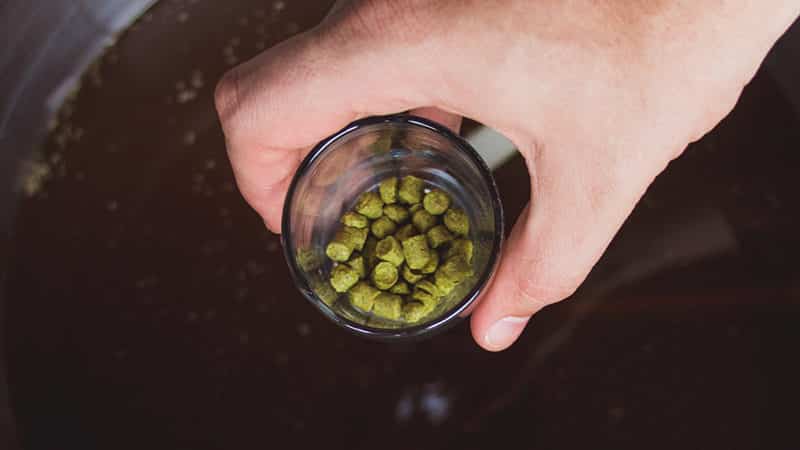 What is First Wort Hopping?

We all get a little apprehensive when we tackle a new brewing technique. What if it ruins what would have otherwise been a perfectly delicious batch of beer? But first wort hopping is easier than you think and, as far as we can tell, doesn’t have a dramatic effect on your beer’s flavor.

Let’s say you want to do one hop calculation. Or maybe you want to really focus on a specific type of hop rather than late additions. Or it could be you want to avoid a massive wort eruption when you hop your brew. That’s where FWH comes in.

Instead of adding the hops during the boil, you add them to the brew kettle before you pour in the warm (but not boiling) wort. You leave the hops in the wort throughout your boil and nix any later aroma additions.

If you’re familiar with the method, you may have heard someone say it rounds out or tempers the bitterness of your brew, especially in classic European recipes. There’s little empirical evidence to support this claim, but it might be something to take into consideration if you want to give it a shot.

In short, it’s vague at best. This method was “rediscovered” in the mid-1990s in a paper published by Brauwelt International, a German brewing journal. While we can’t read this kickoff study ourselves—the journal restricts access to its content, and the paper is from 1995 anyway, so not exactly up-to-date—this is where most contemporary interest in FWH started.

The researchers who published the paper claimed the technique was at least a century old at that time. We did our best to get to the bottom of it for you, but if there’s any other record of first wort hopping in the twentieth century prior to this paper … well, let’s just say it’s tucked away on a dusty library shelf somewhere, or it’s in German, or both.

The (Short) Science of FWH

The lauded flavor profiles of first wort hopped beers are mostly anecdotal. Homebrew guides and handbooks mentioning the method cite the Brauwelt paper and little else as a basis to try first wort hopping.

The Brauwelt study covered the results from two German breweries testing FWH on a pilsner. They added part of their late-addition hops to the wort before starting the boil and left them in throughout the process. They also skipped out on other flavor additions.

Chemical analysis found a difference in hop oil content between the two methods. On average, the FWH beer had between 9.8% and 14% lower concentrations of hop oil than the standard process.

Here’s where the science gets a little fuzzy. While the paper is widely cited, this method was only tested on beers with a mix of Tettnanger and Czech Saaz hops additions, which are both noble hop varieties. The first wort hopped beers were judged in a small blind taste test, and the only style of beer tested was a pilsner.

The panelists cited in the study largely preferred the FWH beer, describing an even bitterness and more subdued hop aroma, which might just have been a function of using generally subtle and more floral noble hops. So if you’re interested in hop-forward beers, these experiences might merit consideration.

We say might because an experiment conducted in 2015 showed less consensus on the flavor difference between FWH and traditionally hopped beers. Again, these are incredibly small sample sizes—under 40 blind taste testers in both cases.

An experimental batch sent to the Oregon Brew Lab for analysis found a slight difference in International Bitterness Units (IBUs). The first wort hopped beer had higher IBUs, but taste testers failed to reliably and consistently tell FWH beers apart from beers with a standard bittering addition at 60 minutes.

It Always Goes Back to Chemistry

Based on the Brauwelt study, FWH may at least change the hop oil chemistry of your brew. Your beer gets hoppy flavors and aromas from small amounts of terpenes, which is the technical term for all those compounds making up a hop’s essential oils. Terpenes are highly volatile and tend to evaporate in high-heat water environments.

But the timing and the temperature of first wort hopping may preserve those essential oils. The process most likely relies on the higher pH in your pre-boil wort, which allows the terpenes to dissolve before the boil gets going. This way your hops still impart flavor without making your beer insanely bitter.

So between the contradictory evidence and our own experiences, the chances of changing the flavor of your beer solely with first wort hopping are pretty low.

So Why Even Try First Wort Hopping?

If not for the flavor, why even bother? Simple: first wort hopping carries less mess potential than your regular addition methods, and it’s super easy to do.

Nothing sucks more than taking your eye off the kettle for a second only to hear the telltale hisses of a boil-over. If you’ve experienced this yourself, we’re sorry for making you relive those horrendous memories of cleanup and messed up recipe calculations. We’re here for you.

Why do boil-overs happen in the first place? You first have to understand what’s happening when you boil liquid. The bubbles you see aren’t oxygen escaping the pot. It’s the physical manifestation of a phase change, or your liquid changing into a vapor.

When you add your hops to boiling water, you introduce highly volatile oils and proteins at a drastically different temperature. Do this too quickly, and you have a volcanic-like reaction of hot wort on your hands. That’s because the evaporating oils and proteins further agitate the phase change process.

With first wort hopping, you don’t have to worry about tempering a bubbly wort disaster. Even if you mix FWH with later flavor additions, you’re still less likely to deal with frenzied wort reaction. These are a premium lineup of feature-rich all Stainless Steel Brew Kettles, designed to keep you brewing for a lifetime.

Buy Now on MoreBeer.com
We earn a commission if you click this link and make a purchase at no additional cost to you.

How to do First Wort Hopping

The actual FWH process is exceedingly simple. There’s no extra equipment required, just a change in your brew process.

When to Start
If you’re planning a first wort hopping, be sure to start these steps after you boil your grains but before you lauter the wort.

New to homebrewing? No worries. Lautering is when you separate your wort from the grain using a lauter tun (which is slightly different from a mash tun). Combination mash/lauter tuns are common homebrewing equipment.

Insulated Cooler Mash Tun Buy Now On Amazon
We earn a commission if you click this link and make a purchase at no additional cost to you. Hands-down the best digital thermometer for brewing. Period. Worth the price 100 times over. Plus, you can use it for cooking 👍

Buy Now From ThermoWorks
We earn a commission if you click this link and make a purchase at no additional cost to you.

Yeah, it’s that easy. Just another reason to give first wort hopping a shot. If you want to make it even easier, try a hop spider for faster cleanup.

Whether or not you want to stick with first wort hopping is up to you, but we heartily encourage you to test it out at least once. At worst, you’ll do a little less work for the same flavor beer. At best, you might discover a smoother bitterness and a new favorite way to brew. 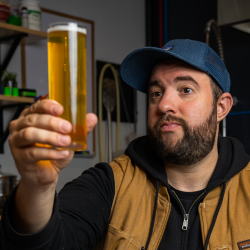 How to Dry Hop Your Homebrew For Supreme Hop Flavor

Want to add hoppy flavor, pleasing aroma, and subtle flavors? Dry hopping can give you all those things. The key is when to do it, and the right equipment. 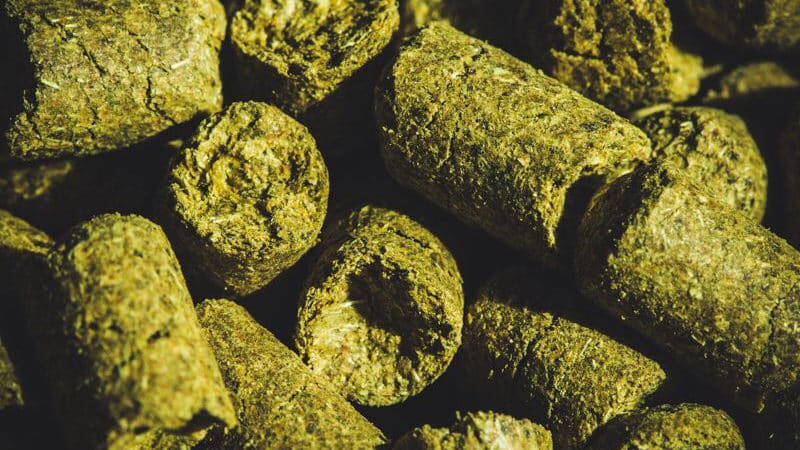 Are noble hops worth the extra expense? We say yes and we're pretty sure you'll agree once you taste the homebrew results. Find out why they're so special. 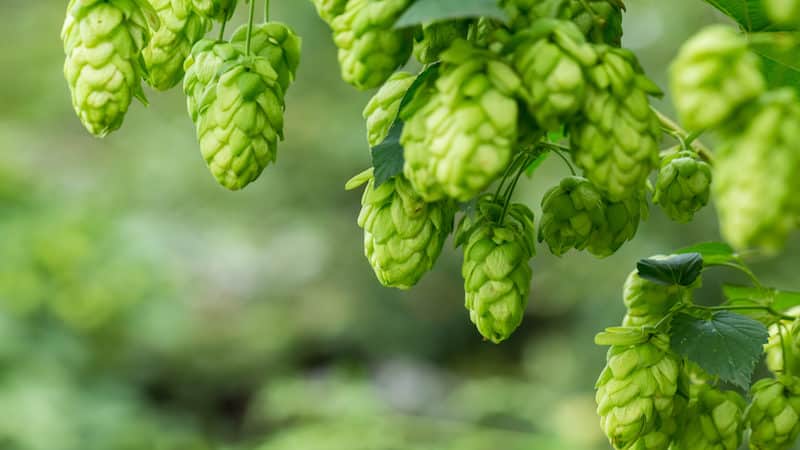 The Complete Guide to Growing Hops At Home

Thinking about growing your own hops at home? Not only can it save you money, you get a lot more control over your brew. Learn how from start to finish.